Camila’s trip: a path made of rhymes

The journey of a Colombian teenager who leaves her country of origin and finds in Uruguayan women the strength to be herself. 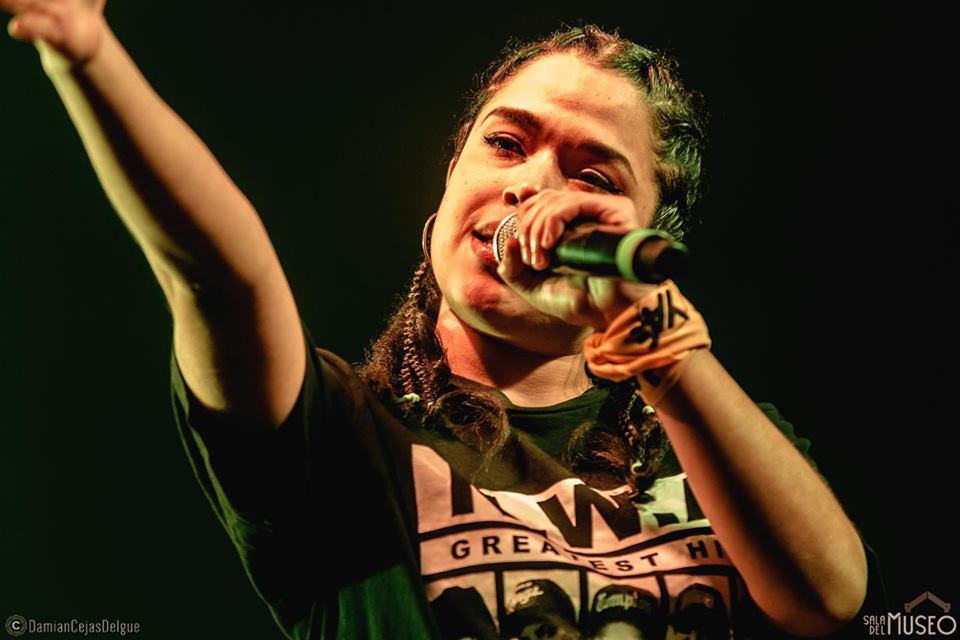 Female rappers have been great references in Camila's life, the photo was taken in a touch shared with the Argentinean rapper Miss Bolivia. Credit: Damian Cejas
“Valencia is my mother and my grandfather. It’s everything,” says Camila while she looks at the index and middle fingers of her right hand. She is sitting in the back of a bus that is taking her to breakdance practice in Montevideo, Uruguay. Half of her head is covered in braids and the rest of her messy black hair is tied with a ribbon. Her thick lips painted dark red, light blush on her prominent cheekbones, and golden hoops hang from her ears.

Liceth Camila Yepes Valencia is 20 years old; she is Colombian and she migrated to Uruguay five years ago. “Valencia” is her artistic name, her index and middle fingers, her identity. Here, in this text, she’s Camila. 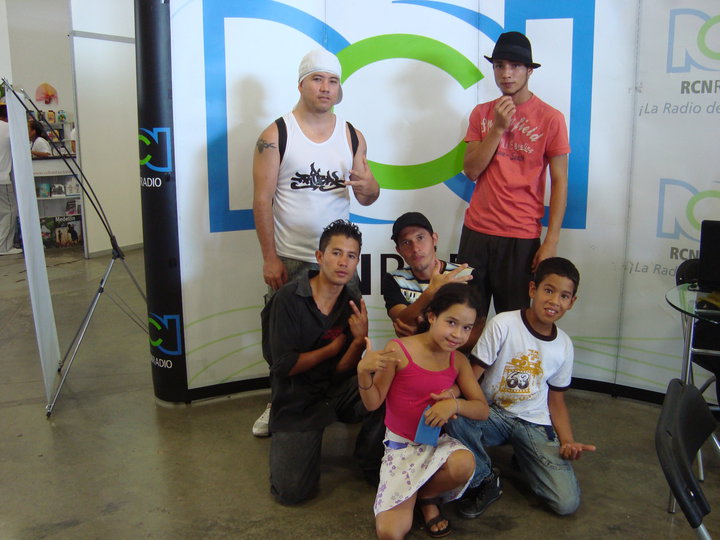 Camilla grew up between rhymes. From a very young age she was part of a rap group in her native Colombia. Credit: Personal file
A girl with thin bones runs across the stage to join her crew companions and follows the choreography to perfection. The audience screams while a huge monster in a black tunic chases her and throw her in the air. She yells and kicks with her legs. The Youtube video shows her with a wide smile, her hair above her shoulders, and agile feet. With six years, Camila was the youngest member of the urban group Universal Soul Crew.‍

It was in 1999 that her family dabbled into hip hop, and on August 25th of the same year Camila was born in Cartago, a city from the Cauca Valley in Colombia, where the temperature never goes below 20 degrees Celsius. Her childhood was full of street games, training everyday after school, and going to Church on Sundays; but there was also a lot of violence. “As a girl, I faced an environment of drugs and chauvinism. Of going outside my door and seeing that there were shootings, seeing a dead person in the corner.”

Camila says that in Colombia one earns very little, a minimum wage. “If it’s enough to pay rent, it’s not enough to eat.” There, her parents never had a stable job and they lived stressed about the lack of food. “It was really sad to see them cry, or to have a piece of bread with sausage to eat with my brother while they had nothing.” The family wondered how long they would go on like that. Until her father’s cousin, who had already left, encouraged him to move to Uruguay, where “there are jobs and life is more calm.” They didn’t think about it twice.

But what made Camila’s life take an unpredictable parth was the kidnapping of her cousin Jiseth. She was eight years old when they took by force the young person that was like her older sister. That’s when Camila’s mind “began to be differently”. I was still a girl but not so much a girl per se,” she recalls. She never heard from her again or knew anything about her. Living with that horror was overwhelming.

In a country with over five decades of armed conflict, “the war and the killings were constant. I saw and experienced death all the time,” Camila recalls. To this, she adds the lack of food and work; the chauvinism in the streets and at home. The fear, always. Multiple monsters expelled Camila, her family and other thousands of Colombians from their country. According to data from the Colombian Ministry of Foreign Relations, in 2012, there were 4.7 million Colombians living outside the country, and between 2012 and 2015, Colombia was the South American country with the highest number of people residing abroad.

Camila’s almond shaped eyes double their size when she recalls the moment when she was given the news. She was in the patio of her house in Cartago, washing clothes by hand in a water tank. Her father entered the bathroom and without looking her in the eyes, he told her that they were going to live in another country. She was 13 years old when she discovered in what place of the world map Uruguay was located. She was excited about the adventure.
‍
A year later, she got on a bus and cried for ten days through six different countries. She was with her mother, her father, and an uncle. “That’s when it hit me, right there, when I was arriving to Cali, the city that is two hours away from my town. I thought that I was leaving friends, a part of my family, the culture, the customs. You arrive in another place and the only thing that remains with you is your family, but everything else changes, everything,” Camila explains.
‍
A rainy and gray day predicted her mood of the following months in Uruguay. The first person she talked to in the new country was the owner of a pension: “she looked me in the eye and asked me how they had welcomed me. I didn’t understand absolutely anything she said, even though we spoke the same language. It was as if I had arrived in the United States, then I was a little nervous.” Camila would have liked to go back to Colombia, but the decision depended on her parents. It was 2014 and she was 14 years old.

A month after arriving, she was attending the third year of high school. She went through “depression” due to the absence of her brother, the harsh cold of the first winter of her life, the lack of friends to train with, and the discrimination she lived in high school, for being a foreigner.
‍
One day, Camila knocked on her house’s door, she dropped her backpack on the floor, and started crying like she had just been born. Hours before, a classmate had humiliated her in front of everyone: “Colombian girl, go back to your country.” They started arguing, raising the volume, yelling. Camila’s blood boiled, her veins were full of anger. She lost her temper, she insulted her classmate; she knew she had to calm down but she couldn’t.

There was no remedy for so much accumulated anger. She got tired of the teasing, of not being understood, of being disrespected, of her country being insulted saying that it has “hot women” or that they have good cocaine. Camila remembers that classmate “because he was a damn chauvinist. Even though at the time I didn’t know this so well, but I noticed that disgusting attitude. I had received other comments like that, but he fed me up.” In that moment she decided that when facing xenophobia, she would not remain quiet.

Camila wanted to leave Uruguay, contradicting the official data according to which the number of foreigners that chose to live in that country keeps on increasing. In 2014, the Uruguayan state processed 3,000 foreign residencies and in 2017 the number increased to 12,506.

“I told my mother that this was not my place and that I didn’t like the people here. But she made me come to my senses; it’s not the people, it was the boy who disrespected me.” She started dreading going to high school, she didn’t know who was going to be messing with her. She questioned if she had to change her “slang” or her “attitude” for her classmates to like her. It was a matter of time. Camila started to respond with a “certain character” in her words: “if what’s going on in my country wasn’t happening, I obviously wouldn’t be here,” she repeated. In 2018, the Colombian nationality was the fourth one with the highest number of processed residencies in Uruguay after Venezuela, Brazil, and Argentina, respectively.

Before the year ended, Camila asked her parents to change her to another high school. She did her third year again, but she just went to classes to write her songs. She says that there she didn’t find what nurtured her art, “the knowledge of life and essential things.” She dropped out of high school to dedicate herself exclusively to dancing and singing hip hop.

A warrior of the art 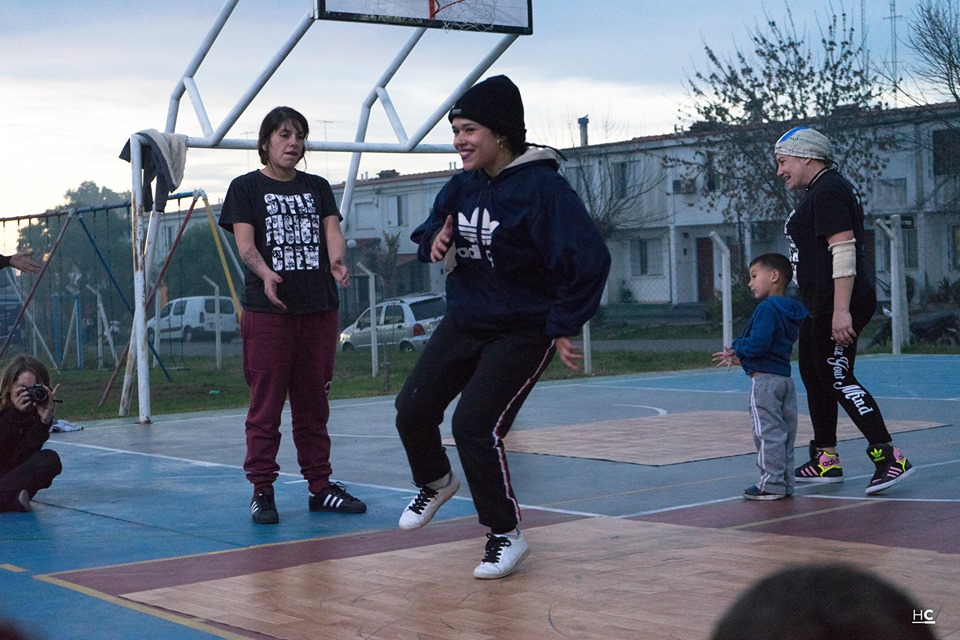 With the arrival in Uruguay, Camila looked for spaces to continue growing. In rap as in life, women have been her support. Credit: HC

“My words were making me strong: writing, composing, rapping,” she explains. Camila increased her self-confidence, she started “having another type of empowerment.” She felt it and she didn’t suppress it anymore.

She stares straight into the camera. Camila walks firmly down Montevideo’s main avenue surrounded by girls and youngsters. It’s night, it’s gray, but her red lips stand out. People walk next to her with indifference. She moves her arms and knows very clearly what she came to say: “I just want to go out to the street / and not see that another woman here is missing / Because a motherfucker grabbed her / took her / raped her / mistreated her / and even shot her in the head.”

The song “Mirada Consciente” (Conscious stare), which she dedicates to her cousin Jiseth, is part of her first EP. In Montevideo, Camila is part of the group of afro-latin women rappers Se Armó Kokoa (S.A.K.) and of the breakdance tribe Style Fusion Crew.

Now, she says that migrating to Uruguay was “one of the most beautiful things” that happened in her life. Not only did she come to know a nurtured hip-hop scene, but she also found a network of vital support of women.

Viki Style, also a member of S.A.K., strongly believes in safe spaces for women: “to get together with other companions that are in the same tune as you. To share experiences and learnings. This type of actions make more women dare and join the hip-hop scene. We’re still a few, but we are more than we used to be years ago.” She says that Camila brought to S.A.K. “ a new way of saying the same things,” besides from her Caribbean accent. “She is someone who is getting to know the scene from another position, she has another look.”

Being able to “get together with friends and train in the park” made Camila “lose her blindfold and question everything.” Especially during early adult years, “a fundamental age to forge a personality,” Viki says. In that way she overcame situations that she always kept hidden, like physical violence at home. When her father beat her, Camila went to her room to cry. “I understood very quickly that that is not how I want to solve things. Violence begets more violence, there’s no way around it.”

She got to a moment in her life where she was able to face her father with the same strength with which she stands on the scenario: “I told him that I didn’t want him to touch even one hair of mine ever again in my life, otherwise everything would go to hell.” She put a stop to that violence, in part, thanks to the Uruguayan women that reminded her what she already knew: that in spite of the deprivations, of the kidnapping of her cousin, of the insults at school, there’s no place for the monster to grow inside of her. 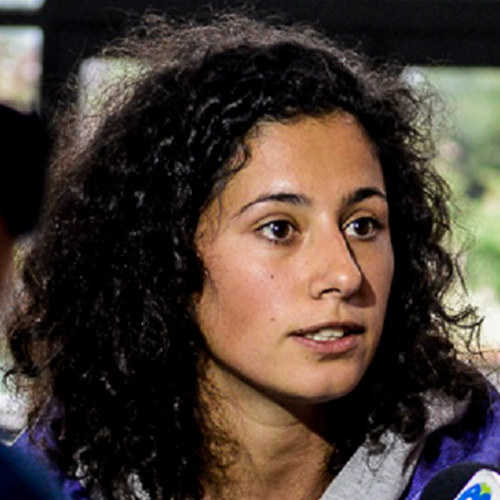 @flor.pagola
Florencia Pagola has a BA in Communications Science, she is a writer and a free-lance journalist. She contributes with digital media outlets and human rights and feminist organizations in Latin America. She is passionate about telling stories, mainly about women.