I heard Claudia Vázquez Haro speak for the first time on my graduation. She delivered a speech in front of a crowded auditorium that listened in astonishment to her words coming from behind the podium. It was December 2012, five months before Claudia had founded the organization OTRANS. Days prior to the speech she received the Argentine National Identity Document (called DNI for its Spanish acronym), which would make her the first trans womanto receive a DNI, with a photo and name that represented her, and the gender that she had chosen.
‍
I have a vague memory of her 2012 speech: she talked about her native Peru, about the opportunity she had of studying in Argentina, and she thanked the Universidad Nacional de La Plata, her alma mater, where she is currently a professor and investigator. What I do remember from that day is how the room filled up with silence. We were astonished, mute, with one of those silences that can only be the result of something completely unexpected. Although by December 2012, a few months had passed since the Gender Identity Law had been approved in Argentina, seeing a trans woman/immigrant deliver an academic speech seemed to be something from another planet.
‍
That same year, the National Institute of Statistics and Census conducted the first survey on the trans population. It was a pilot done in La Matanza, one of the most populated municipalities in the province of Buenos Aires. The study showed that the life expectancy of trans people was 39 years. Only 64% of the people surveyed declared that they had completed elementary school while 2% said they had finished high school or university. When asked whether they had carried out activities in order to obtain money, 70% said they were currently doing or had done sex work.
Many transgender people have found in sex work their only means to survive: 87% of transgender people said they would stop doing it if they had another possibility, according to a report by the Fundación Huésped y la Asociación de Travestis, Transexuales y Transgéneros de la Argentina (Attta).
Many of them are abolitionists: they believe sex work is not a job, but the result of poverty and marginalization. Claudia is part of the privileged group that managed not only to go to university but to build an academic career that includes a Ph.D.

“In Argentina, I managed to include myself in a life project on equal terms, especially because I was able to study and work as a teacher and researcher, something rare when you consider that the majority [of trans people] replicate the prostitution stereotype,” Claudia told me seven years after graduation. I met her again at a political event, while she was coordinating the Commission on Migrants and Multiculturalism.

In my mind, I was certain that Claudia had a strong personality, she seemed proud, self-confident. That morning, I felt like the antithesis of what she appeared to be. I was worn-out, empty, vulnerable. The day before, I had experienced harassment on the train on my way to meet her. We met at Ciudad de La Plata, 70 km away from Buenos Aires, where I live. I was traveling with Gerónimo, my eight-month-old son, when a man who must’ve been in his 40s sat next to me and started whispering in my ear, “mami [mommy], you’re so pretty.” He then moved and stood in front of us. He first tried to touch the baby, but I managed to stop him. Minutes later he asked me to kiss him. The only thing I managed to tell him was, “stop it, you’re bothering me, go away.” The harasser turned around giving his back to us and remained that way for the entire journey. To add to the discomfort of the harassment, I was angry at myself for my silence. Why didn’t I ask for help or scream? How can I take care of my body and the baby facing of someone I consider threatening? With these questions in my head, I went to meet Claudia, whose story has a lot to do with breaking the silences that weighed on the body.

“Peru is a heteronormative society and we can interpret that there I lived an exile in my own body. In this context, we can not only understand immigration in terms of trespassing a border in a geographic sense but as a way of coming out of a corporal exile and finding it here in La Plata, Argentina. A place where I could not only settle geographically but also where I could really be Claudia,” she says. As she’s saying these words, her voice immediately takes me to graduation, to that December in 2012, when in the main hall of the School of Journalism and Social Communication I received my degree diploma and swore to practice the profession with Memory, Truth and Justice, slogans associated with the last Argentine military dictatorship.

My mother, siblings, and partner, Gustavo, who I had just started dating, were present at graduation. There were no plans for having Gerónimo. While I speak with Claudia in one of the halls of the Colegio Nacional, Gerónimo sleeps in his stroller while my brother rocks him back and forth to keep him asleep, my mother looks at us from the other side of the hall. Claudia’s voice sounds familiar to me. She doesn’t know it but we bond in a series of significant events, we have shared a certain space and time that, at least in my perspective, have shaped me. We are also drawn together by our love for the words.
‍
“Words have allowed me to put my life story into dialogue; my story and those of many other trans people and travesties. Words allow us to be stronger and become valid spokespeople, and not only people that you read from or hear from. It stops us from being voiceless. The power of words is very important, especially in public spaces. This is of vital importance,” she says. And I regret my own silence, on the train yesterday.  I also understand that speaking out doesn’t happen all of a sudden. Just like migrating, searching for one’s identity, or generating knowledge, speaking out is also a journey, a construction.
‍
“I’ve always wondered why people like us – trans and travesties – did not appear in dictionaries or the Larousse Encyclopedia that I read in Peru. I wonder who says that we are sick people,” Claudia recalls as the closing ceremony of the political meeting in which she participates is being prepared in the courtyard of the building. She speaks as an activist, as a militant, as an intellectual. There are many Claudias inside Claudia. “The question I always asked myself was in regards to knowledge: how to attain it, where, who creates it. So I thought, ‘Not only do I have to go to university to acquire the tools and training, but also to transform knowledge. This story was a dream, a wish and the trip to Argentina implied all of it.”
‍
I think of the Claudia whom I heard speak in 2012, with her DNI [National Identification Document], thankful for the opportunities she had in Argentina. And now I listen to a woman who speaks about desires, dreams, the journey to becoming. I wonder what else is left for us, “I think if there is something worth fighting for and that is to transform society from the public space onwards. Our next step is to occupy political spaces, to have our own voice, to achieve representation, and to make decisions based on a trans, travesti, migrant and pluricultural agendas,” she remarks.
‍
I say goodbye feeling incredibly touched by her words, her way of seeing life, her journey. We walk together down the hall that served as the stage for this interview, my mother approaches her. She tells Claudia that she remembers the speech she gave at my graduation and thanks her for her struggle, her strength, and for setting an example. My brother listens to the conversation, he is moved. Gerónimo just woke up from his nap. I hope that he dreamt of a different society. I hope that he’s part of the journey.

Thanks to Claudia, for agreeing so lovingly to this interview, to my family for coming with me on the reporting. To Lu Ortiz, my mentor, and guide in this narrative and introspective journey, and Nathalia Restrepo for helping edit the video that comes with this article over cups of coffee.
‍ 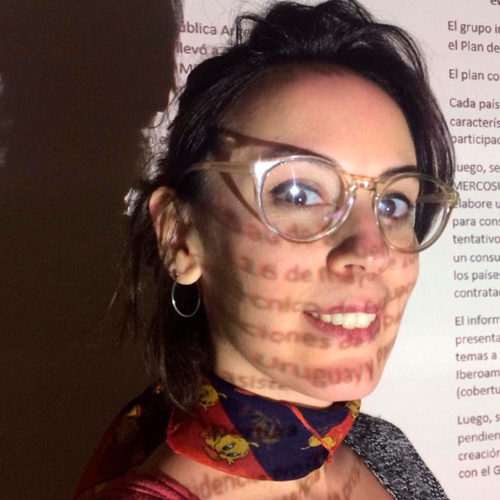 @macetoledo
Cecilia Toledo has a bachelor’s degree in Social Communication and is a digital journalist in Buenos Aires, Argentina. She writes for multiple Latin American media outlets and she manages human rights communications for NGOs. She lives with Gerónimo her 11-month son, her partner Gustavo and their cat, Sartén.